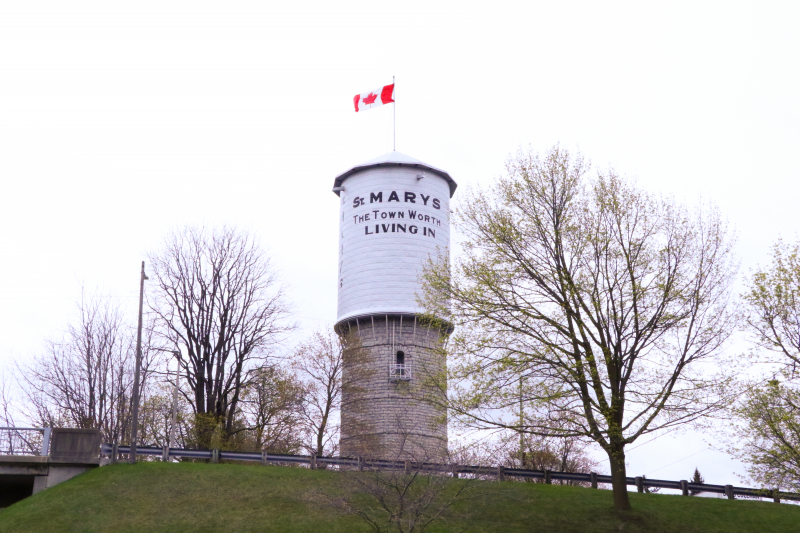 One of the true hidden gems among the small towns of Southwestern Ontario lies just outside of Stratford, and a little under an hour’s drive from Kitchener-Waterloo.  Positioned between more heavily-travelled Ontario highways, one typically would need to be deliberately seeking St Marys out to arrive in its charming downtown – but this town will make such a journey well worth your while!

Settled astride the Thames River in the early 1840s by immigrants of primarily British Isles stock, the crossroads was initially named ‘Little Falls’ for the limestone ridges and ledges the river flowed over in its vicinity.  Like so many other villages and towns founded during that era in our part of Ontario, the first industries to spring up in St Marys were centred around the natural power generated by the Thames River – lumber mills, grist mills and associated trades and craftsmen.  The abundance and availability of limestone soon led to quarrying being a major business, and today’s town is still characterized by its impressive limestone architecture, both in civic buildings and older private residences.  It’s easy to see why ‘Stonetown’ is a nickname that’s stuck over time.

The Grand Trunk Railway made its way into St Marys by the latter part of the 1850s, in between its incorporation as a village in 1854, and its incorporation as a town in 1863.  One of the lesser-known facts about St Marys is that for a period of time around the turn of the 20th Century, the town was home to the highest per-capita number of millionaires in the entire country.  A quick tour around the older residential neighbourhoods will give this away, as there are a disproportionate number of grand old homes scattered throughout the town.  In an era where fortunes were built around the agricultural industry and railways, the town was well positioned to capitalize.  In fact, it quickly became the local centre for most agricultural processing in Southwestern Ontario.

Today, St Marys is home to about 7,300 people, but its heritage of grandeur and old-world quiet charm hasn’t eroded one bit over the years.  While the current population might be on the small size by modern standards, the town’s explosive economic growth and relatively large size by the standards of the late 19th Century ensured that it’s never been hurting for infrastructure.  From walking trails and parks to its own 18-hole golf course and even a municipal opera house (for real – look it up), St Marys was Ontario’s 1900s version of Las Vegas.  This is a small town that can serve up civic amenities unrivaled by towns of 30,000 or more.  Additional contemporary highlights include the Canadian Baseball Hall of Fame, as well as a former limestone quarry since repurposed as Canada’s largest outdoor swimming pool.

Not only is St Marys the beneficiary of an embarrassment of civic riches, but it’s blessed by natural beauty, too.  Rolling topography and spectacular river views will bring to light why the area was so attractive to European settlers all those years ago.  The good news is, for now, St Marys remains relatively undiscovered by 21st Century ‘settlers’.  Stately homes and riverfront properties sell for significantly less than what similar real estate typically goes for only 20 minutes away in Stratford.  It’s a matter of time until the secret is out though, and prices will inevitably climb to match the pace other better-known small markets in our area.  But here’s some more good news – at Chestnut Park West, the opulence of these beautiful old homes and stately limestone municipal architecture is directly in our wheelhouse.  If you’re interested in learning more, reach out and get in touch!